Everyday there is a call that I have to make for for something. I mean a call for an appointment, a therapy service, a reminder for this and that when it comes to our Little's but when a call needs to be placed for our teenager it strikes a cord within. 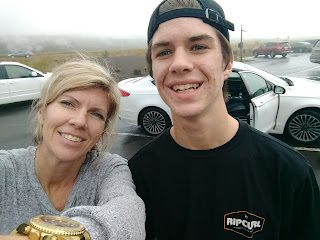 I am speaking about our little but not so little guy. Yes meaning our teenager who has been diagnosed with Asperger's now it is all on the Autism Spectrum. The day he was born, I could tell you then something was quite not right. Having been our third born child, we were semi pros right? He did not want to be swaddled. What newborn does not want to be swaddled and held? Not our son, he wanted to be free range and definitely not laying in the hospital isolette. When it was time to nurse, it was a game, he needed to be stripped to a diaper, his feet pitched and even then it was a task to eat.

At first, I thought it was me and all the medication that was given to me from the time I was thirteen weeks pregnant to keep him from being born too early but after a bout of jaundice he made his way home where his quirkiness continued. So, me being me, resourceful, he began in-home early intervention therapies. All the while not knowing a thing about autism. By the age of three is where the first diagnosis came then the fight to learn, advocate and how to become resilient began.

I commend my son, how I would love to be in his mind for just a mere minute. Just to have a glimpse of his thought process. The where, what and why of things. How does he put things together? What make his mind spin and his ability to stream things together is uncanny. Many times over the years, I have had to explain his situation due to something that has happened. At times apologize for something he did and apologize for something he did not do but only because he was there. It is crazy because I am always baffled by someones expression or comments. Comments of, "did not know he was autistic, well he looks normal" or "he is just acting out for attention" or "he is getting great grades, would have not known it" or "better yet he does not comes across as being autistic". Really? What is wrong with people? Well, I stopped asking that along time ago.

Well first of all let me say, what is normal to anyone's standards? Second, does anyone who does not truly know the definition or the characteristics of autism know what being on the autism spectrum is? Lastly, does anyone outside our home truly know my son have a right to say anything. I say this because as he has for many many years he has had to adapt in general setting of life of what "normal people" take for granted. 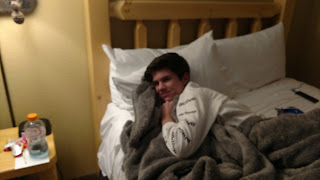 Believe me it has not be easy, watching from inside and outside. Especially being a mother, his mother! With having older children who were invited to the monthly birthday parties or hanging out with friends then with our guy who is happy doing his own thing, being glued to X-Box, Play Station or whatever the new technology is at the moment. However, his source of group activity comes from striving at sports because my husband never stopped pushing and started him at a young age to empower himself to never quit but it also has another side to that where we have had to also help him learn that losing is okay and being a team player is just that a team and there has been a lot of work instilling that. Though there are times he does step out of his comfort zone to do things with in the "social aspects" of life but our world is not always user friendly and this takes work, work everyday.

Yes, we have done things differently when it came to therapy because a diagnosis of Asperger was not recognized in the DSM as a true diagnoses of Autism those many years ago. Now as it falls under the Autism Spectrum per the DSM-V thus there are more resources available. Believe me there is still the fight to obtain those resources. However, it does not matter, we will continue to advocate. You figure you do not come to a point to stop or turn back but there the times when you want to but you are so grateful for the help, services and people that have bent over backwards and beyond to get you through an issue or situation to better help our child which keeps the will to fight there.

His understanding that the world does not really consist of the in between gray matter as his world mainly consists of black and white. Needless to say everyday, is a new day. A new day of the unknown. To that I am thankful is he is pretty straightforward and very smart. Always analyzing something. Numbers, football stats, people. Observing someone, something or someplace, whatever the case maybe he is his own person trying to be his "normal".

With that said, our teenage son looks just like any other teenager just trying to get through; an only difference maybe, one you cannot see, he is on the Autism Spectrum along with three of his siblings and many others throughout the world. I ask before you speak, judge or think you know of a situation or circumstance; please take a moment, smile, be kind and think before you speak because you just do not know what that teenager, child, mother, father, grandparent, caregiver or sibling just happened to be going through.

Love you Little One, To the Moon and Back - GOD BLESS


“The most interesting people you’ll find are ones that don’t fit into your average cardboard box. They’ll make what they need, they’ll make their own boxes,” Dr. Temple Grandin
“This is a FOREVER journey with this creative, funny, highly intelligent, aggressive, impulsive, nonsocial, behavioral, often times loving individual. The nurse said to me after 6 hours with him ‘He is a gift’ INDEED he is,” Janet Frenchette Held, Parent


Until Next Time...Make It A Great Day!